Smoking Roma Man was the meanest assignment I was ever issued as a college student.

In the midst of clubs and tests and all the rest that goes with being a junior in school, my Intro to Visual Art instructor aimed to school us on values.

We became acquainted with the grey scale by painting pieces of paper in varying shades from white to black and creating thousands of analogue pixels with a hand operated hole punch. Never have I achieved more extreme carpel tunnel cramps.

Our assignment was to translate a color image on a much larger scale and in black and white. And I mean much larger. The finished image is completely covered with about three square feet of little dots individually placed using a sewing needle and a little dab of glue.

On all-nighter, night-two of little grey and black dots I puked, representing my first and only time having vomited exclusively from focusing that hard.

A lot of my classmates didn’t even attempt it. The assignment didn’t affect our final grade all that much, but the assignment made me realize how satisfying tedious creative projects can actually be.

While I don’t totally love Seurat, I’ve long been fascinated by mosaics, specifically their rich texture. I spent more time in cathedrals vibing out on meticulously cut gold tile enclaves than my poor mortal soul.

So when I watched the image of this haggard royalty emerge square inch by square inch, I really got into it.

I’ve since focused my energy on similar projects that were more about the journey than the destination, including sewing an elaborate t-shirt quilt, which took about 3.5 years start to finish.

And I’d love to say that this old gypsy was the best-completed project in the class, but it wasn’t. Someone recreated a portrait of Bob Marley and his dreads looked so amazing with the subtle, disjointed texture of the paper dots.

Another artist, a photographer, recreated a self-portrait, which radiated in symmetrical, concentric circles from the center of her camera, which was perched on her chin so that only her eyes and hair were visible around it.

The finished image lived underneath my childhood bed with the rest of my forgotten art stuff in my parent’s house for a few years.

For Christmas one year she had it framed right and set it up for me under the tree. 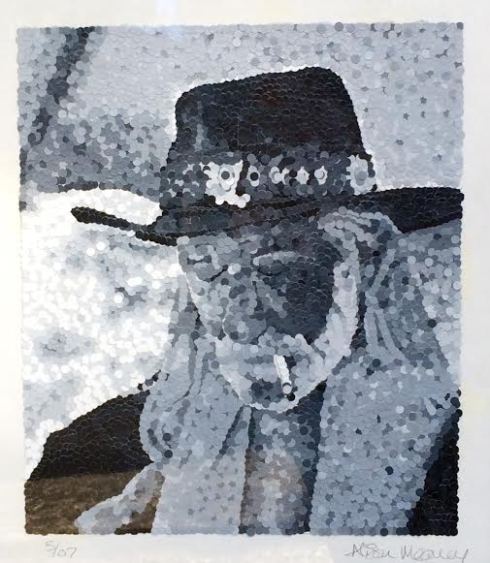 *the feeling when you place the last piece*
Crowd sourced crafting
Cookbook holder bedazzled with beadwork from the loom
A pair of pastel pots 👩‍❤️‍💋‍👩
Took a literal stab at some more precise tile work with this Islamic pattern study. One part meditation, one part brain scramble, and I’m loving this bright and squiggly energy.
All the baby plants are bursting open and I feel that
Follow Alison Meaney on WordPress.com
Loading Comments...
%d bloggers like this: